Patients who develop shoulder instability will generally fall into one of three categories:

Interestingly, traumatic instability has been an observed medical problem throughout the recorded history of humankind. The first report of a shoulder dislocation is found in the world’s oldest book, the Edwin Smith Papyrus (3000-2500 BC). A drawing demonstrating a shoulder reduction technique was discovered in Egypt in the tomb of Upuy (1200 BC). Hippocrates described at least six different techniques to reduce a dislocated shoulder. In contrast, the concept of atraumatic, multidirectional instability was not introduced until 1980 when Dr. Charles Neer, the father of modern shoulder surgery, described it.

Patients with recurrent traumatic shoulder instability have an unstable shoulder as a result of tissue damaged from their initial injury. They will usually recall a specific event during which their shoulder was dislocated or injured. This condition is most common in young, athletic people. In fact, the younger and more active the patient is when the first dislocation occurs, the more likely it is that recurrent instability will develop. This type of instability is usually unidirectional. The most common direction of humeral head dislocation for this condition is anteriorly (in the front) and inferiorly. If the first dislocation occurs during the teenage years, there is a 70% chance that recurrent instability will develop. However, people over 40 years of age who dislocate for the first time have less than a 10% risk of developing chronic instability. Therefore, treatment should be tailored to suit each patient’s age and lifestyle.

Multidirectional instability (MDI) results not from a traumatic event, but from a generalized laxity of the soft tissues (Figures 1 and 2). These patients usually have hyperflexible joints. This predisposes the shoulder capsule and ligaments, which normally would provide stability, to stretch out over time (thus leading to recurrent subluxations or dislocations). With MDI, both the right and left shoulder are usually involved, whereas with traumatic instability only one shoulder is affected.

Congenital instability may result from glenoid dysplasia (Figure 3) or from systemic conditions such as Ehlers-Danlos syndrome. The glenoid and labrum normally work together as a suction cup that helps hold the humeral head (the ball) in place. If the glenoid is mishaped, like in glenoid dyplasia, there is a loss of this suction cup phenonenon and the shoulder is less stable.

Figure 1. A patient with multidirectional instabilty.

A patient with traumatic instability will often report a history of recurrent shoulder dislocation. Someone with symptomatic MDI might complain of instability symptoms, but more often they will present only with shoulder pain.

A diagnosis of shoulder instabilty is made based upon the patient’s history, and by the physician performing an examination. Other tests, such as shoulder x-ray films or an MRI, may be needed to provide the physician with the additional information needed to make an appropriate treatment recommendation. 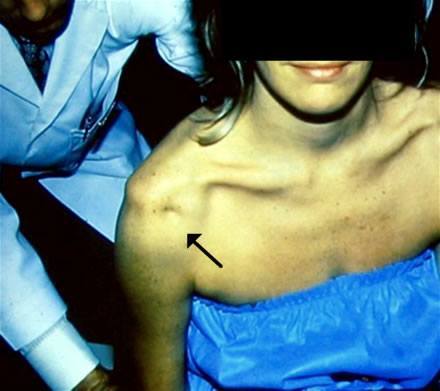 Figure 2. The physician finds a sulcus sign (arrow) on exam. A sulcus sign is a gap between the humeral head and undersurface of the acromion. It appears when longitudinal traction is placed on the humeral shaft w/ arm at side while in a seated position, and it is felt to be pathognomonic of multidirectional instability. Up to 1 cm of displacement may be normal, whereas displacement of 3 cm is considered severe.

Initial treatment focuses on strengthening the muscles of the shoulder girdle. Having stronger muscles in both the front and back of the shoulder will increase the its stability.

Surgical management may be implemented if rehabilitation fails to enhance stabilization. By tightening the shoulder capsule and/or repairing damaged tissue, shoulder stability can be enhanced. This is often performed through an open incision, but an arthroscopic procedure may be recommended in some cases. The prognosis for stability after shoulder surgery is generally good.